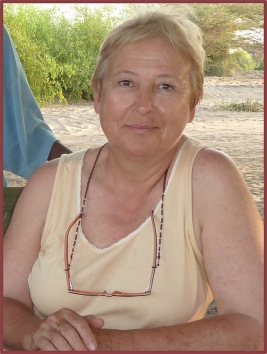 Hélène is an archaeologist and is emeritus Director of Research at the Laboratoire de Préhistoire et Technologie (UMR 7055) of the CNRS in Paris, France. She has been conducting archaeological fieldwork in East Africa for more than 30 years and was the Director of the WTAP from its inception in 1994, until 2012.

Hélène founded the Mission Préhistorique au Kenya (MPK) in 1983 and at the end of the 1980s was invited by Richard Leakey to explore the potential of West Turkana, who was then excavating the Turkana Boy skeleton at Nariokotome. The incredible archaeological richness of the area led her to create in 1994, alongside the National Museums of Kenya (NMK), the West Turkana Archaeological Project (WTAP).

Hélène’s enduring research interest is the evolution of lithic technology in the Early Stone Age, from its late Pliocene beginnings ~3.3 million-year-ago until the end of the Acheulean ~500 thousand-years-ago. Her study of early hominin (australopithecines and early Homo) toolmaking activities follows a technological approach, examining the complexity and skill involved in transforming volcanic cobbles into sharp-edged stone tools, and what this might mean for cognitive variability and thresholds. In West Turkana, archaeological traces can be positioned within a well-defined chronological and palaeoenvironmental framework, so that the impact of global and regional climatic changes on humanity’s biological and cultural evolution can be gauged.

In her own words

What do you like about being in the field in Turkana?
“I love watching the sunset behind the hills from Lake, and sleeping outside, watching the stars “

What do you miss when you are in the field?
“A really powerful fan to keep me cool!”

For more information about Hélène’s research or to contact her directly, please visit her page on Researchgate.